In case this was never brought up, which I’m sure it has been, I am half Japanese and half Caucasian. Since everyone likes to ask, my mom is the one who is Japanese. Straight from Japan. Shipping not included. Therefore, I found myself hopping on a 12-hour plane ride several times in my life to go visit my family in Japan. More specifically my grandma. I have no idea how to describe my experiences in Japan to people because it’s just a different culture. I can skim the surface on differences I was hyper aware of and any additional questions I can answer. This will be part 1 of my Japan series.

I may be half Japanese, but Hafus or Hapas – as they call us – can stick out like a sore thumb. I am 5’6’’, which is relatively tall there, with brown hair, and a Caucasian nose. Despite the almond shaped eyes, I am visibly the foreigner in a throng of black haired 5-foot nothing individuals. Half Asians are the trending topic right now, as people would often assume I was a tv star or model, but in reality, I was just… well just me. My dad had it worse in some ways as being 6-foot meant he had to constantly deal with everything being shorter and smaller. And I mean everything. The ceilings, the toilets, tables, seats, portion sizes, it was honestly a hazard to be around him.

I was also hyper aware that everyone noticed me. I would walk down the street and get stares. Though, when talking to employees at different establishments, they would avoid eye contact as much as possible. Talking to cute guys was not an option. When it was just me and my grandma, or as I call her Obaachama, I had to follow a stricter set of rules. Being “the foreigner” I had to be with someone and if I were to go out alone, I was only allowed to go to certain places for a couple hours. My family would warn me Kobe was heavily populated with Yakuza, Japanese mafia, and I had to watch out since I was easier to take advantage of. Now, I don’t think Japan is that dangerous, my family is just overprotective. Or they know my tendencies to end up in awkward situations.

For one week I attended a Japanese junior high school. In the morning, the students traditionally wore the stereotypical Japanese school uniform. Though, when they arrived to school the students changed into this ugly mustard colored shirt and puke green gym pants. Oh, and they changed shoes as well to avoid getting the building dirty. Students were expected to greet each other in the halls and help clean the classrooms. Classes ranged from math to Japanese to wood working to swimming. A surprising number of students didn’t know how to swim and would sit out even though they live on an island. If I lived on an island my whole life where tsunamis are a threat, I would train to be a professional swimmer at that point. Lunch was another interesting affair because the meals were served by students and were very healthy.

My first day was an experience. During the previous week a monthly calendar was distributed to every student in the school. On that Monday my name was on the calendar. Everyone knew there was a foreigner. When I was introduced to the class all the guys thought it would be funny to ask if I thought each guy in the class was cute and they kept doing this until the teacher snapped. That night she called to apologize profusely about the boys’ behavior. The rest of the week I followed my friend who attended the school like a puppy because any moment I strayed, she would snap at me.

There’s not as much to digress on this topic since I didn’t find that much different or weird about their schooling. I guess there was a part of me that wanted to fit in and when I realized that I was just something to stare at, I felt let down.

Geez… where to begin. Many people have seen images of Japanese toilets. Well they are very high tech. You have your bidet, heated seat, music, fake flushing sound, and other semi-useless functions. Every button is labeled with a symbol or image. It’s just ironic that the one control I struggled finding most was the one that actually flushes. It was sometimes the smallest, most obscure button at the back, in other cases, after pressing a few controls you could make an “educated” guess. And these toilets were in most public facilities. I never really saw a regular toilet with just the handle to only flush without an added light show. At older buildings or mainly parks, however, they have toilets in the ground. This meant women had to squat and pray they have decent aim that day. Those toilets are absolutely disgusting. I don’t get why the high functioning toilets are such a necessity everywhere else, except certain areas where you do your business in the ground.

ANYWAYS. My favorite was the toy vending machines. The toys there are intense, nothing like the small useless rings or crappy stickers you get in America. When I was younger, I once got a toy that was in the shape of a ball. You open up the ball and inside is a miniature fish market. You got fish to put on this tiny display shelf and it came with a tiny cat who owned the fish market. Also the outer part of the ball could be transformed into a teapot. Think about it. You get a ball (think the size of a pokeball) that can turn into a teapot with a tiny fish market inside that is owned by a cat. Wtf.

Everything is green tea. You have your basic green tea. Then green tea latte. From then on it spirals out of control. Green tea ice cream, green tea cookies, green tea Kit Kats, green tea hard candy, green tea lozenges, green tea facials, green tea everything. There were even animal characters based off of different types of tea, the main dog had green tea leaves as ears. I can’t make this stuff up. I love green tea, but not to the extent Japan does.

When it comes to faith, I have no idea where anyone falls. My grandma has dragged me to Shinto shrines and Buddhist temples. I’ve rubbed a golden cow’s head for good luck, clapped and rang a bell to pray to different gods, covered my body in incense smoke for good health, visited my family’s graves watched by a Buddhist monk, read my fortune multiple times, and I’ve got to say, everyone did this. Throughout the year people will visit different shrines and monuments to pray. Especially during New Years, the shrines are packed. Vendors will sell food, candy, have games, and everyone attends to buy good luck charms to start the new year off right. From this experience I gathered that not everyone is super religious, rather they are superstitious and follow certain customs. It’s all about tradition. I’m just not sure how much each person believes in different gods or Buddha. Then again, my Obaachama hits up everything. She prays to every potential god out there and will stumble into any denominational church. At least she’s covering her bases.

*Tip: The shrines with the red arches are Shinto, that’s how I differentiated 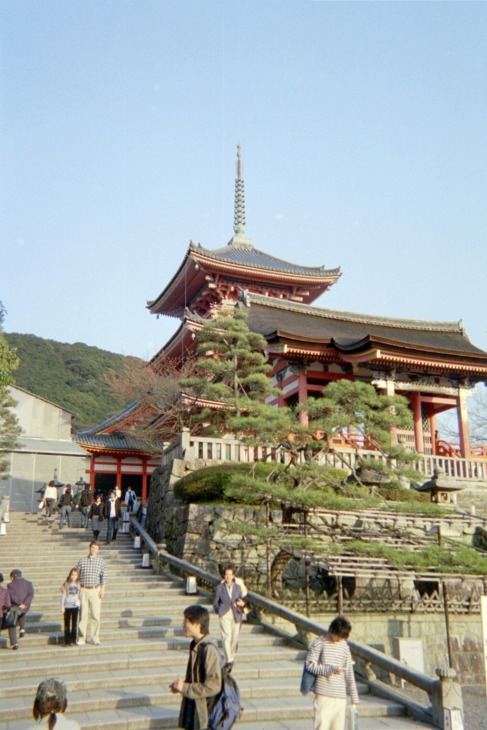 The people. The attitude there is more formal than casual. No one walks to the grocery store in sweats, they wear regular attire and look presentable. Presentation, status, and mannerism is heavily emphasized in the Japanese culture. When speaking formally, it is important to address your superiors and elders differently than you would your colleagues. My dad likes to joke that no one likes to talk to each other in Japan since they have to keep tabs on everyone’s status in relation to them. Also, PC culture isn’t really a thing. The Japanese are a tough crowd that doesn’t play victim. I would see elderly men and women, with hunched backs or canes, power walk their way up a mountain like it was nothing. Meanwhile, my legs are giving out because walking up and down a mountain just for groceries is tiring.

Though, if I were to complain, I wish mental health was taken more seriously. Starving to lose weight isn’t as frowned upon and the suicide rate is higher than the United States. Though not by much.

And I am just skimming the surface. Part 2 I will tell some personal stories about going to the National Diet, going to the ER, and watching my sister kick a deer.